« Prev | Next »
Return to all Articles

A warship built with steel salvaged from the World Trade Center has arrived in New York City. 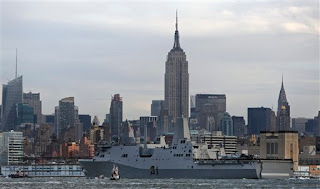 Here's a great Material Reuse/Recycling Story (especially when materials are unable to be Reused in their current condition):
The Navy assault ship USS New York, built in Louisiana with tons of steel salvaged from the World Trade Center, passes in front of the Empire State Building as it arrives in New York Harbor Monday, Nov. 2, 2009. The bow of the $1 billion ship, built in Louisiana, contains about 7.5 tons of trade center steel. (AP Photo/David Goldman)
From BBC News: The USS New York sailed up the Hudson River to near Ground Zero, where it fired a 21-gun salute in tribute to those killed in the 2001 attacks. It was watched by relatives of 9/11 victims, along with members of the emergency services and the public. The US Navy is to hold an official commissioning ceremony for the new warship on Saturday. The New York set off on its maiden voyage from Louisiana, where it was built, nearly three weeks ago. The bow of the boat contains 7.5 tonnes of melted steel from the fallen buildings of the World Trade Center.
The ship's crest includes images of the Twin Towers and features the colours of the city departments that first responded to the terrorist attacks in which nearly 3,000 people died.
'A transformation'
People gathered by the waterfront to watch the ship's 21-gun salute honouring those who died in the 11 September attacks. The crew stood to attention along the deck as the guns were fired.
Among those watching was JoAnn Atlas, who lost her firefighter husband in the attacks. "We have to remember. It's a way to honour them," she told the Associated Press news agency. Rosaleen Tallon, whose firefighter brother was among those killed, said she was pleased that the steel from the towers had been reused in the ship. "It's a transformation of it from something really twisted and ugly," she told AP. "I'm proud that our military is using that steel."
About one in seven of the 361 sailors serving on the ship are from New York state, a higher percentage than would normally be the case, a Navy spokeswoman told AP. She said there had been many requests from Navy personnel to serve on the ship.